Planning Submission: Gilbert Road, Cambridge
A Planning Application has now be submitted for the refurbishment and extension of a 1930's semi detached house in Cambridge. The house has been unoccupied for over three years and is in need of total refurbishment to make it habitable. The proposal involves the conversion of an attached garage into habitable accommodation, a rear kitchen extension, a first floor extension above the garage and a loft conversion. Further project information can be found on our Projects page.
Planning Submission: Kingsdown Road N19
We have submitted planning for the remodelling of a locally listed four storey Victorian terrace house in Islington. For more project information check our Projects page. 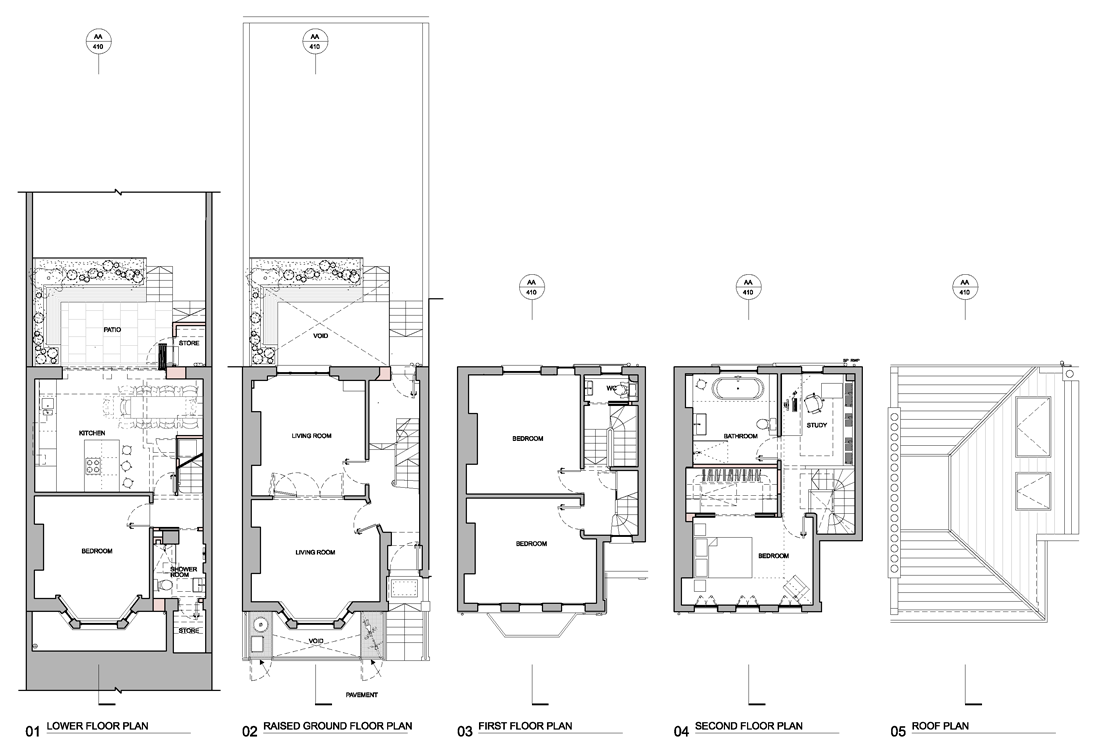 Planning Submission: Artist's Garden Studio N15
Following a very productive Pre-Application meeting with Haringey earlier in the year we have now submitted our proposal for an Artist's Garden Studio. The proposal replaces an existing shed structure on a tricky triangular plot which the uses for their stained glass art work hobby. The proposed design will provide a robust and fit for purpose studio space with good quality natural light. Composed of masonry and timber cladding, the stepped form is intended to provide a discrete and sympathetic addition which compliments the timber and established planting boundary.
New Appointment: Rowley Road N15 Kitchen Extension
We have been appointed for a side return kitchen extension with a challenging design and construction programme. Works start on site in June.

New Appointment: Hadley Street NW1
We have been appointed to partially remodel the interior of a Victorian terrace house in Kentish Town. The proposal involves the creation of a new large family bathroom on the first floor and the reconfiguration of the upper floor to create an en-suite shower room. A key aspect of the project is to future proof the waste drainage strategy so later phased works, including a glass side return kitchen extension, are not compromised.

Planning Consent: N10 Roof Extension and Interior Remodelling
Our remodelling and roof extension of a former residential care home in the Muswell Hill Conservation Area has obtained planning consent with no objections. The proposal also involves modifying and upgrading an existing rear extension so it will compliment the proposed new dormer addition. We are now progressing the Technical Design Stage.

New Appointment: Kingsdown Road N19 Interior and Garden Remodel
We have been appointed for full architectural services on the remodelling and refurbishment of a late 19th century Victorian terrace villa. On account of the strong period detailing and character the property is locally listed with Islington. The project involves the internal reconfiguration of the lower ground floor level to create an enlarged kitchen dining area with improved access onto a split level and re-landscaped patio and garden.
New Appointment: Gilbert Road, Cambridge, Extensions and Refurbishment
Our client has purchased a 1930's semi detached property which has been unoccupied for a number of years and is in need of total refurbishment. The proposal will involve the addition of new space above the garage, kitchen extension, and loft conversion.

Site Progress: Avondale Road N15 Roof Extension
Work on site is now progressing quickly as the roof extension nears completion thanks to Tomas and the TomBuild team. We have achieved ceiling heights of up to 3 metres, levels of insulation to exceed Building Regulations, and optimised the picture window view by setting back the side return portion of the extension. A mono pitch further reduces the mass of the extension and compliments the pitch roof of the existing building.

Planning Submission: Muswell Hill N10
Our remodelling and roof extension of a former residential care home in the Muswell Hill Conservation Area has been submitted for planning.
Planning Consent: N15 Roof Extension
Planning approval has been obtained for our roof extension on St Ann's Road N15.
Planning Submission: Downhills Park N15
We have submitted a planning application for a kitchen extension in Downhills Park N15. A project requiring some tricky technical interface details between new and old elements to be resolved before the design could be finalised for planning.

New Appointment: Artist's Studio
We have been appointed to design a studio for a glass making artist in South Tottenham. The brief requires the building to be designed with flexibility and adaptability in mind so it's function can easily be repurposed if required in the future.
Planning Granted: Rathcoole Avenue N8
Our application for a roof extension in Crouch End N8 got the go ahead from Harringay planners this month.

New Appointment: Roof Extension
We have been appointed to design a roof extension on St Ann's Road N15 to create two children's bedrooms, a shower room and integrated storage solutions. The design will also optimise the structural arrangement to optimise the limited headroom.
Planning Application: Roof Extension N8
Our application for a roof extension in Rathcoole Avenue, Crouch End was submitted this month.

New Appointment: Kitchen Extension
A new appointment for a kitchen extension in Clinton Road, South Tottenham. Unusually, the site had already recently obtained planning consent for an extension. However, the client later realised there were a number of technical complexities which involved daylighting an internal room and coordinating the constrained site services which the previous scheme did not resolve. Vickers Architects have been appointed to design an alternative proposal which will address the technical challenges and create a more considered family kitchen dining space.